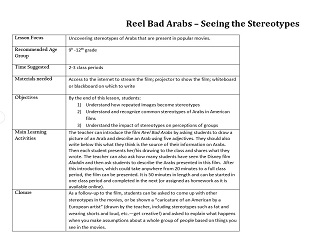 This lesson plan is meant to accompany the film, “Reel Bad Arabs.” Based on the research conducted by Dr. Jack Shaheen, this documentary discusses the manner in which Arabs have been portrayed throughout cinematic history. The documentary specifically focuses on Hollywood films and is narrated by Dr. Shaheen. Ultimately, the film calls upon viewers to recognize the need for alternative films that portray a more realistic description of Arabs in general. The film is featured on Al-Masdar. >